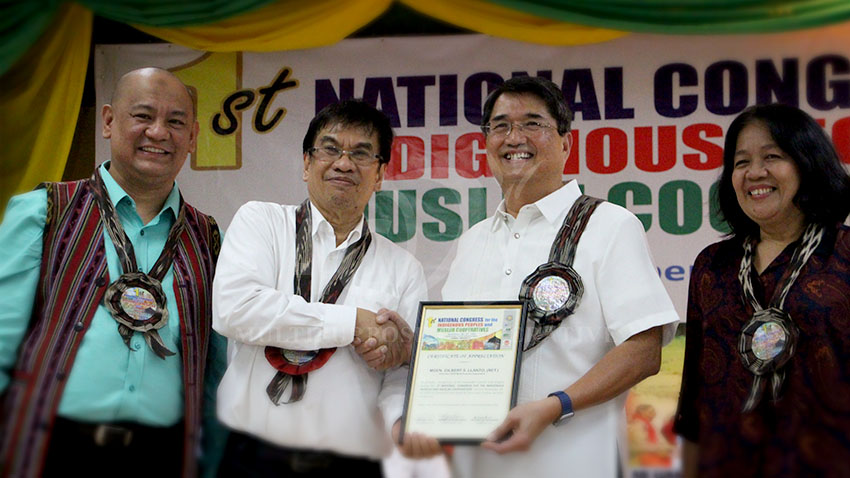 The Cooperative Development Authority (CDA) and the National Commission on Muslim Filipinos (NCMF) spearheaded the conduct of a National Congress for Indigenous Peoples (IPs) and Muslim Cooperatives from November 26 to 27, 2015 at the Family Country Hotel and Convention Center in General Santos City. ACDI MPC was a co-convenor of the Congress, which was attended by more than 200 delegates from various groups from the Lumad and Muslim communities and stakeholders of the peace process in Mindanao.

On the first day of the convention, CDA Chairperson Orlando R. Ravanera shared the objectives of the National Congress and the direction of the agency on how to attain peace in Mindanao by developing and strengthening the cooperative sector in Mindanao. Other representatives from co-convenor cooperatives such as CISP and ACDI MPC, and stakeholder organizations such as the Office of the Presidential Adviser for Peace Process (OPAPP) and Anak Mindanao (AMIN) Party List gave inspirational messages and insights on how to achieve sustainable peace and development of Mindanao.

As the head of the largest and most outstanding cooperative in the country, MGen Gilbert S. Llanto (Ret), Chairperson of ACDI MPC, gave an inspirational message that underscored the link between sustainable peace in Mindanao and people empowerment. That is, cooperatives have the critical role in advancing “inclusive growth” that will empower people at the grassroot communities to have a sustainable livelihood, and decent and dignified lives. Most importantly, Chairperson Llanto expressed the commitments of ACDI MPC to forging partnerships and linkages with Lumad and Muslim Coops on the following sectors for development in Mindanao: agriculture, capacity-building of small local-based cooperatives, disaster preparedness, health, affordable and renewable energy, environmental conservation, product distribution and media, among others.

Another key activity of the Congress was the signing of the Memorandum of Agreement (MOA) between the CDA and the NCMF that will enhance cooperation to promote and develop the capabilities of IPs and Muslim Cooperatives.

The second day of the program focused on a workshop that elicited insights and recommendations from the attending cooperatives for the crafting of a multi-year roadmap on the development of the Cooperative Sector Movement in Mindanao. A Master Plan/Roadmap will be drafted during a workshop to be convened by the CDA in December 2015 with ARMM officials and other government agencies, lawmakers, Muslim Coop leaders, leaders from large coops, and other stakeholders. Subsequently, the draft plan will then be submitted for finalization during the CDA’s Peace Forum to be held in January 2016.